As Jon Younger notes in a Forbes article, “the pandemic accelerated the shift to full-time for some freelancers, by choice or furlough.” But for would-be freelancers and even current freelancers, it can feel like there’s a lot of freelance stress.

In the article, Younger cites a survey that found the majority of freelancers who are working freelance as a side gig haven’t considered freelancing full-time for three key reasons:

But they’re three things that shouldn’t worry you as a freelancer. Let’s break down all three of these common freelance stresses.

As far as freelance stress goes, this is one of the most common. You may even find people who have tried freelancing for a little while say, “Oh, freelancing is tough! It’s feast or famine.”

But freelance being a “feast or famine” is a complete myth. If you have a proven, rinse-and-repeat system for finding and landing clients, then you have a way to bring in consistent work. (It’s why we created the Freelance Success Framework!)

The key is sending high-quality, value-based pitches—and systematizing your process so you’ve always got multiple irons in the fire (and multiple potential projects!).

Freelance dry spells come when you leave your work up to chance. It’s when you assume a client will hand you another project or waste time on sites like UpWork that you give up control of your freelance income and, therefore, its predictability and stability.

This stressor is largely tied to wondering whether it is possible to make enough income as a freelancer. It makes sense when we all have bills to pay!

For many in full-time jobs, it can feel “safe” to be at a company where you know what you make per hour (if you’re an hourly employee) or per year (if you’re a salaried employee).

But yet another survey shows 60% of freelancers have enough or too much work.

The loss of benefits

Ah, the golden handcuffs. Here’s the secret: employers give you benefits so they don’t have to pay you more.

As a freelancer, your rates are naturally higher because you’re covering these costs. But there are huge perks for freelancers, too.

You can deduct your healthcare costs. You can set up a self 401k and contribute as the employee and the employer, significantly reducing your taxable income. And, you can take as much vacation time as you want. (Note: we are not tax or financial experts. Always talk to your tax prep and financial professionals for more advice.)

And, of course, you can price your services (and raise your rates) as you see fit! You are not beholden to waiting and hoping for a raise.

Your Turn! What freelance stress worries you the most? Share in the comments below!

Kate is a copywriter with 10+ years of freelance experience, including 5+ years of full-time freelancing for small businesses, Fortune 500 companies, and agencies. 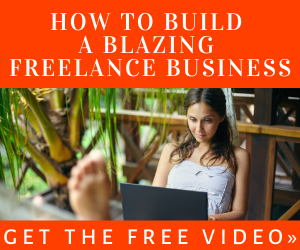